In previous posts, we were introduced to the hardware and made it operational with the kernel module. Soooo… (drum rolls) it’s time to write and run a program on the Epiphany chip!
But how can one do it? What compiler do I use? What "language" does the Epiphany chip understands? Is it C, C++, assembly, binary, or what?

The Epiphany chip on our parallella board comes with 16 high-performance CPU cores. Similarily to power-efficient ARM (Advanced RISC Machine), the eCore has a RISC architecture. The choice comes with no surprise since the RISC architecture typically requires fewer transistors than in CISC architecture (e.g. x86), which improves the power consumption, and that is a top priority for Epiphany design (up to 70 GFLOP/Watt processing efficiency at 28nm).

This means we can write programs similarily to how we do it for ARM CPU. In fact, the SDK comes with prebuilt GCC, so we can write C/C++ without any hassle.

Every processor or processor family has its own instruction set. Instructions are patterns of bits that, by physical design, correspond to different commands to the machine. Systems may also differ in other details, such as memory arrangement, operating systems, or peripheral devices. Because a program normally relies on such factors, different systems will typically not run the same machine code, even when the same type of processor is used (source: wikipedia).

Let’s take a look at the compilation stages: 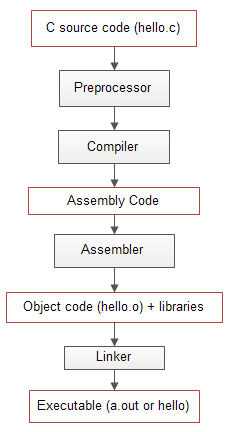 As you can see, the C compiler produces the intermediate assembly code, which later is compiled into machine code. Following that trail we realize that in order to compile "C" code for a specific CPU we need to:

Here is an example of the machine language code:

since it’s really hard to operate with such long numbers, the assembly represents the machine code to the user with a set of mnemonics, such as:

We have 16 RISC CPUs available, but what does the "RISC" mean?

In short, a RISC CPU has a small set of simple and general instructions rather than a large set of complex ones.

The Epiphany assembler instructions are presented on the chart below. If you have ever written any assembly, you can notice there similarity but also some differences such as "mov" family.
Please note that I shamelessly copied the image from Epiphany-V sheet (not Epiphany-III), so there are some minor changes.

One quite interesting thing you will notice is the split-width instruction encoding method used in Epiphany ISA. This is, all instructions are available as both 16- and 32-bit, with the instruction width depending on the registers used in operation. Any command that uses registers 0 through 7 only and does not have a large immediate constant is encoded as a 16-bit instruction.
Commands that use higher-numbered registers are encoded as 32-bit instructions.

For example a move command with small immediate constant (ie. value) is translated to 32-bit instruction:

where a small immediate is translated to 16-bit instruction:

Okayyy… Where those bits come from? What registers?

Epiphany ISA is a load-store architecture that divides instructions into two categories:

For instance, to sum two integers placed in memory (RAM), the following needs to happen:

On the hardware view, the CPU needs a few registers and already mentioned ALU unit. In fact, the eCore looks like this: 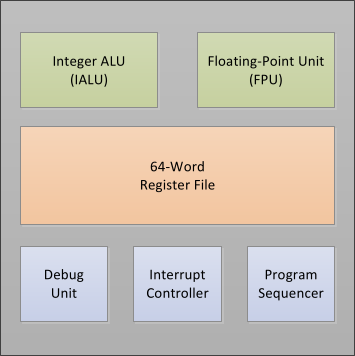 The assembly compiler translates "lowest-human-readable" assembly syntax into the machine code. But how does that happen?

The Epiphany architecture uses a split-width instruction encoding method; the maximum instruction size is 32-bit and the lowest 16-bit. The general type of instruction is given by the op (operation) field, the lowest bits. The other bits are used for remaining parameters such as "RD" (destination register) or "IMM\<SIZE>" (immediate). Let’s take a look at "MOV" operation:

To move immediate value "25" to register "R0" we execute:

It seems we have everything we need to compile assembly to machine code:

Hopefully that wasn’t too difficult, so lets try the same but for a 16-bit number: 1984:

Let’s validate if your calculations are correct:

One interesting fact about Epiphany ISA is the movt instruction that copies the upper 16-bits of immediate into the register. Why not simply use the mov instruction? Well, as you see in the example above, the maximum instruction size is 32-bit, so there is no place how to fit the 32-bits immediate. According to the Epiphany reference, mov and movt can both be executed within one clock cycle, not bad!

I bet you understand the assembly compiling process now. But where does the compiler comes from? Do we need to write it on our own?

Fortunately, we don’t have to do it! Instead, we can use binutils with cgen:

Where cgen and binutils cross paths is the assembly compiler (GAS – "GNU Assembly"), as shown below. 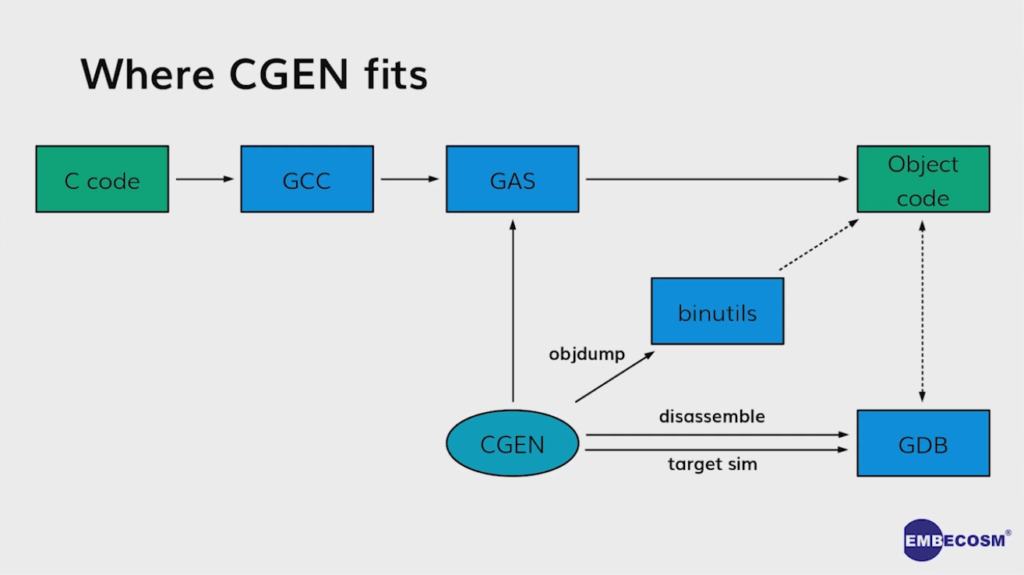 We won’t dive too deep into the SCHEME language, but let’s try to decode the mov (32) instruction defined in epiphany.cpu:

huh, it looks familiar, isn’t it? It’s almost similiar to the decoding table we used to manually transale assembly to machine code. The longest line stands out, let’s take a closer look:

Even if you’re not familiar with the language (as I am), the above snippet resembles the defined format. For instance, the opcode used for mov is 1011 or the imm16 that stands for 16-bit immediate value.

The binutils package already has epiphany arch support upstreamed, so we sure can build it from the main repo (or use AUR package instead):

Compiling C is the next thing in the stack, but it’s far more complicated than just assembly. If you’re interested in writing a new backend, I would recommend the tutorial by Krister Walfridsson.

The above graph illustrates the high-level view on GCC compilation process. While it’s non-trivial to understand all its parts, we are not going to discuss it here. It’s important, however, to understand that we need to write a backend to enable a new architecture. For instance, the compiler needs to understand how many registers are available or how to perform some optimizations (i.e., hardware loops), etc.

Thanks to Adapteva & Embecosm cooperation the GCC backend is written by professionals in the field and upstreamed for everyone’s use. To build it, you additionally need libc (newlib):

Alternatively, there is LLVM backend written by the community, but it doesn’t have feature parity with GCC.

Huh, did I mention that libc needs to be ported to the given platform? Yes, it’s not particulariy difficult but requires some time to wrap your head around it. 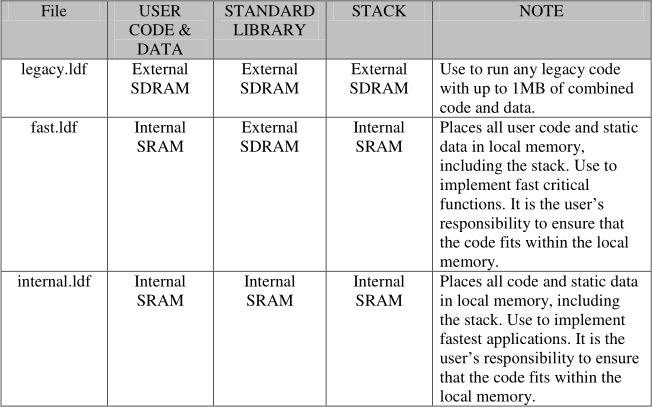 This is how you pass the linker script:

You should treat this article as a mere introduction to the compilers world. We took a ride through machine code and assembly, but we haven’t touched the GCC too much because the length of such an article would be much longer than this one. I’d encourage you to take a look into GCC sources, to learn more about compilers optimizations and how these relate to a given architecture.

I am quite impressed by the work done by Adapteva & Embescom team. It’s just a handful of people who did all this work in quite a short period of time (afaik). Taken the exhaustive documentation that comes with it, I can only say, "Thank you!".