FreeRTOS is a real-time operating system kernel for embedded devices. Usually, we would use it for tiny-time-constraint applications where reliability is at utmost importance, so why bother about RTOS at all?

It’s true… "Accelerator" is probably the most common use case for Epiphany chip. We aim to write high-performance and parallel applications, where slow parts and coordination is left for the host (ARM) CPU. But as we go higher in the stack, we start to see that many operations are also I/O bounded. In such a case, we would like to share the CPU with some other task rather than waiting and wasting it. How?

This is where a kernel comes into play. In a nutshell, it provides resource management capabilities, such as multi-tasking or multi-threading, where CPU-time is split fairly between running tasks so that overall utilization increases. Of course, there is an additional cost to multi-tasking, and often writing applications that leverage native API (ie. e-libs) is more performant, but watch out for complexity! You need to decide what tradeoff is most suitable for your application.

In this article we’ll do a few things:

One may say that running FreeRTOS on Epiphany doesn’t make much sense (performance, use case, low memory limits, etc.)… If you believe so, you can treat this post as a tutorial on how to port a kernel on a new platform. I couldn’t find anything that specific, so here we go!

ralisi first ported the FreeRTOS on Epiphany. To simplify a few things, I have introduced a few changes in this fork:

Throughout this article, I reference the fork, so you should clone the repo, as shown above.

To compile the FreeRTOS kernel you need to have epiphany SDK setup, this is:

We used all of that before, so checkout previous articles if you don’t know how to proceed.

It’s worth to note that FreeRTOS follows MISRA C standard guidelines. While there are many rules, I think it’s good to know that functions are being prefixed with a few characters denoting its return type. Once you know that, it’s easier to read the code. For example:

There are two locations we’ll look at:

You can test out demo application right away, by running:

While working with the code, I’d recommend resetting cores before/after each FreeRTOS app run. Depending on the kernel version you might encounter "unusual behavior," so a quick reset removes false positives:

Again, we are going to fragment memory, mangle stacks, and deal with interrupts. As for a single application, the "printf debugging" approach is all right. But here it’s going to be a pain… Instead, I would rather use gdb that allows us to control the execution on Epiphany Core, peek into registers, and perform ad-hoc operations.

You can find instructions on how to use it here:

To be honest, running gdb on remote chip ain’t pleasant… Compared to traditional usage where one or two commands are sufficient, here we have process extended by at least a few operations. While it all could be better, I encourage you to use gdb anyway. Simply it’s worth it and saves you a ton of time!

Before we dive into the RTOS kernel, let’s recall what we trying to acheive:

Our Demo application is about to execute two separate tasks running on a single eCore, where each task periodically increments a counter placed in local memory. On the host side, we fetch and print counters.

The important (and most problematic) thing here is how to write task preemption logic, but we’ll talk about that later. For now, this is how the demo code:

I’d say the code is self-explanatory, but here comes help:

Working with modern kernels is often a complex task, and we saw that while working on the Epiphany Linux Kernel module. It takes much time to get around the documentation, concepts, and API because the kernel is very rich in features.
The FreeRTOS is different. It’s by order of magnitudes smaller (as most of RTOS kernels) and provides only bare minimum kernel functionality. That makes it a great candidate to study as it’s "components" are present in other kernels, but here are basic enough to get a grasp on them in a reasonable time.

A task in FreeRTOS is represented as task control block (TCB) structure that holds its context. By looking at the soruce we can weed out properties of interest, such as:

Okaaaay, stack, queues, scheduler… We don’t know what that is yet, so lets follow the trail of xTaskCreate with the hope we find some other clues:

It seems the xTaskCreate does three things: initialize a task control block (TCB), allocate stack, and make the task ready for execution (add to ready queue). Once it’s all done, our memory may look like this: 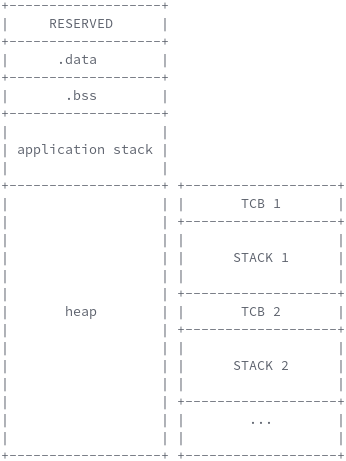 I said "may" because things depend on a linker script and FreeRTOS configuration (ie. static vs dynamic allocation). To be precise in our example TCB and stack is dynamically allocated on the heap.

An eCore sequentially executes instruction by instruction of one task at the time. To run a second task (aka. share the CPU), we need to store "program execution context" somewhere in memory and "restore" the second task. As far as I can tell, the "context" in literature is not precisely specified, but usually, we talk about: registers, memory maps, various tables etc.

Yes, you’re correct. Our context must include:

The scheduler is the part of the kernel responsible for deciding which task should be executed at any particular time. The kernel can suspend and later resume a task many times during the task lifetime (source). From the end-user perspective, it appears that each task is running concurrently, but in fact, the multitasking OS rapidly switches the tasks making that impression, see the illustration below:

The scheduling policy is an algorithm used by the scheduler to decide which task to execute at any point in time. The criteria we should consider for selecting the right algorithm:

RTOS system constraints on time, this is the processing must be done within a fixed time slot, or the system fails.

Implementation-wise scheduler decision is influenced by a few factors, such as task state. For example, if a task has the highest priority, but it’s waiting for a semaphore, then there is no reason to schedule it. This being said, each task has one of the following states:

When sleeping, an RTOS task will specify a time after which it requires ‘waking’. When blocking, an RTOS task can specify a maximum time it wishes to wait.
The FreeRTOS real-time kernel measures time using a tick count variable. A timer interrupt (the RTOS tick interrupt) increments the tick count with strict temporal accuracy – allowing the real-time kernel to measure time to a resolution of the chosen timer interrupt frequency. (source)

Simply, each time the tick is incremented the kernel (scheduler) must check if there is another task to unblock or wake. The "tick" is triggered by a hardware timer, so we have to set it up in the portable code.

Depending on the architecture, other features could be used by the RTOS kernel. For example, many CPUs come with a memory protection unit (MPU) that prevents us from overstepping the memory (i.e. overflowing stack).

Epiphany chip gives us such option and we can set protection over a local memory pages. The below example sets protection on first 4 pages and sets them as read-only (0x0000 – 0x4FFF)

It’s time to focus on the implementation! Everything here tightly relates to the theory we covered above but also touches the knowledge from previous articles (ie. ISA). Feel free to go back if things are unclear.

FreeRTOS doesn’t have a "special" logic to handle newly created task, but rather it treats a new task as it’s has been context-switched already. What it does is call restore context routine.
The side effect is that we need to initialize a stack frame separately and keep it consistent with save/restore context routines.

On the effective context switch, a task is going to be "saved" and "restored". Because SAVE routine is the exact opposite to RESTORE, we can discuss only one:

At first we point the frame pointer to the TCB structure.

Next, we pop and load PC and STATUS values from the stack.

What’s left is to restore values of remaining 64 (or rather 63) registers.

Epiphany III comes with two event timers. We use one to set up periodic system tick:

Because the kernel is written in C we use elibs API to avoid clutter code.

There are two ways context switch can happen:

For the first case:

For the second case we just call vTaskSwitchContext:

In step 3 the E_CTIMER_0 was configured to trigger systick. In step 4 we defined the handler logic, but where is the code that calls the handler when timer triggers?
This is the flow:

Well it's a bit unusual flow because portSAVECONTEXT plays also a role of interrupt handler, but works. The missing IVT <-> handler is defined as a macro:

It's all about setting up the environment and starting the first task!

FreeRTOS is full of pre-processor conditionals that control what function gets compiled into the application. While it doesn't look very appealing, this method ensures a small binary size, which is critical for embedded devices.

In the FreeRTOSConfig.h we define a few variables that configure the kernel behavior, for instance:

Wasn't it that too difficult, right? It's not when you read about it! I spent many hours getting around the stack frame initialization with gdb... But I admit FreeRTOS is not that scary as I thought it would be.

// Bonus: There is a small modification in linker script "internal.ldf". If you feel like hacking today try to understand why this is needed 🙂